This site was created by and is maintained by Andrew J. Peterson. Here are some highlights of its evolution: 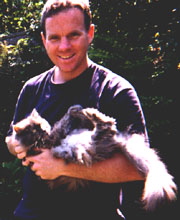 It was originally created on a G3 PowerBook using BBEdit Pro on MacOS X. Now it's a MacBook Air and I usually use RubyMine. We use locally-grown, hand-coded HTML and CSS. I created the few graphics with Adobe Photoshop LE, Elements 2.0 and Macromedia FireWorks. The photo comes from a scanned analog photograph.